Why Transportation Companies Resist Change, Miss Out and Lose Money

I’m embarrassed to admit how long it took me to start banking online.

I put it off for a long time because the way I banked wasn’t broken. I told myself I liked going into the bank, standing in line, chatting with the teller.

Sure, it took up some time, but it wasn’t too much of a hassle. My bank was just around the corner and open late on Thursdays and Saturdays, so I could fit it into my schedule.

I knew other people were banking online and seemed to like it. But I wondered: how much better could it really be? My system worked just fine. Why fix what’s not broken?

I didn’t know what I was missing.

Of course once I finally switched, I never went back. Banking became a breeze. Something I didn’t even have to think about, let alone make time for.

It wasn’t just that I no longer had to wait in line. That pain was bearable. It was all the other things I had no idea I was missing out on.

The convenience of being able to see my balance whenever I wanted. Having the ability to easily look through the history of my transactions - something that always comes in handy at tax time.

I no longer have paper bills cluttering my kitchen table. I can deposit cheques simply by taking a picture and sending it in.

Even better, I set up direct deposits and automatic payments. I now save money each month without lifting a finger, let alone walking to the bank.

Paying bills went from a Saturday morning task to something I never have to think about. Not that I was spending a lot of time thinking about it before, but it was something I had to remember to do or it didn’t get done. Now it happens automatically.

You can do the EXACT same thing with your back-office paperwork.

Here at Microdea, we help transportation companies make almost the exact same switch that I did when I moved to online banking.

We help them go from physical to digital. We make their billing paperless and automatic, like my deposits are now. We automate their Accounts Payable, the same way I automatically pay my bills each month.

We give them a central place where they can see all their documents and gain visibility into their transactions and financial standing, like my online banking app does for me.

We get rid of a lot of the paper cluttering their office, like it used to clutter my kitchen table.

We even allow their drivers to take pictures of documents and send them to the office without having to drop them off, the same way I now deposit cheques.

And perhaps most of all, we make the whole thing a breeze. We make it something they don’t even have to think about.

The same concerns I had.

When we first talk to a lot of folks at transportation and logistics companies, they say they have a system that works just fine. Just like I did.

But that response misses the point. It’s not about whether the system is broken. It’s that there is a way, way, way better system. A system that unlocks doors you don’t even know exist until you’re handed the keys.

I had no idea there was a world of automation I was missing out on. I had no idea how much time I could save, how much mental energy I could conserve by not having to remember to go to the bank and pay my bills. I couldn’t imagine saving money each month automatically, paying bills automatically, having almost no reason to ever step foot in the bank again. That picture wasn’t clear to me. I was stuck in my ways and couldn’t see the potential.

When they switch from physical to digital and start using a powerful imaging system and automation engine, a world of possibility opens up. It often starts with automated billing or automating payables, but it certainly doesn’t end there.

The list of things that can be partially or entirely automated is longer than your arm and includes things like:

Companies often start with one process and then quickly move to another as they begin to see the benefits and realize the potential. What before could only be done manually, suddenly becomes automatic. A task no one even has to think about.

Employees are empowered to do more because they no longer have to remember to do all the nagging little things that used to take up so much time and mental space. They no longer have to search through filing cabinets to find documents, move stacks of papers from desk to desk, or step foot in the post office.

As a result, these companies run more efficiently. They make more money. They grow.

It ends up being about so much more than simply a different way to pay your bills. The debate isn’t about whether you can do what you need to do without digital solutions and automation. You can get by without them—for now.

Heck, I could still go to the bank and pay my bills in person if I really wanted to. But why would I ever want to do that?

Think back to when you first made the switch.

You put something off because the way you did it already worked. You had a system and didn’t want to change it. You delayed and delayed and delayed. You told yourself the current way wasn’t so bad and the new way wouldn’t be that much better. Maybe you convinced yourself it was a fad that would pass. Either way, you found every little reason to do nothing.

And then one day, something finally clicked. You took the plunge, made the switch and never looked back.

That’s what automating your back office will be like. You’ll switch, your business will improve immediately, and you’ll wonder what took you so long.

Only you won’t. You’ll know it’s because you had a system that worked and you didn’t see a reason to fix what’s not broken.

This article is my way of giving you a reason. I hope it made something click. Because I can tell you from experience, you’ll be embarrassed it took as long as it did.

If you’d like more specifics about how automation can revolutionize how your company does paperwork, take a look at the following white paper that explains how it can be used to increase cash flow, recruit and retain new drivers, and deal with safety and incident claims. 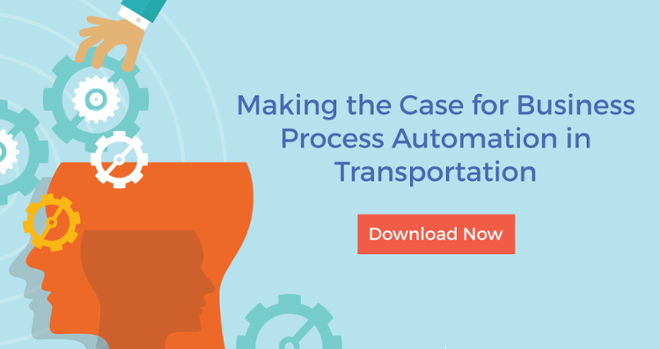 Steele Roddick is a Content Specialist at Microdea where he creates content that helps transportation companies drive their business forward. He’s endlessly fascinated by technology trends, chess, and discovering new places to travel with his wife.